Kate’s signature from a letter written in 1937 to Chief A. E. Bargren congratulating him on his 47th anniversary as a Rockford policeman. (Midway Village Museum)

In honor of Women’s History Month, we thought it would be fitting to talk about Kate O’Connor, one of the most notable businesswomen, philanthropists and suffragists from the Rockford area. Here are some highlights from her life story.

If you lived in Rockford from the 1880s to the 1940s, you would know the name Kate F. O’Connor. Born June 1, 1863 in Rockford, IL to Irish immigrants Cornelius O’Connor and Mary O’Malley O’Connor, Kate was the youngest of 8 children. She graduated from Rockford High School in 1878, and afterwards studied drawing and attended the Academy of Fine Arts in Chicago.

In 1882 Kate was appointed to the position of Deputy to the County Clerk. Four years later she was made a notary public by Illinois Governor Ogilsby. The Register newspaper described her in 1887 as follows: “Though she does the work of an able-bodied man, she is small and slight in appearance, wears her hair down her back in one braid, and never wears her dresses longer than to her ankles.” (12/29/1887) The article continues to state her local popularity in both the business and wider communities.

Her popularity was put to the test in 1894. That year, the papers reported that the new County Clerk wanted Kate to resign from her position, citing that too much of her time was being spent on other commitments. (Morning Star, 11/15/1894) The local uproar was reported in the papers, citing her faithful and exemplary record in the position, and within 5 days, the County Clerk reversed his original statement.

In 1898 Kate did leave her position, opening up her own offices in the Brown Building, which offered services in pensions, loans, real estate, and insurance, with probate matters listed as a specialty. Kate found much success in the real estate business and focused her efforts in that sector. She eventually opened an office in Chicago, doing business in Winnebago, Stephenson, Ogle, and Cook Counties.

Looking at Kate’s long list of organizations and clubs she was a part of there were not many clubs in Rockford that she was not involved in. She was a part of groups at St. James’ Catholic Church, member of the Business & Professional Woman’s Club, founded the Rockford Riding Club in 1887, and was involved in the Winnebago County Home for the Aged, among many, many others. She sponsored petitions, directed inquiries into wrong doings, and fought for Civil War widows to receive their husband’s pensions.

In 1921 Kate, along with her fellow members of the Business & Professional Woman’s Club, backed Rockford teachers in a dispute over equal pay for female teachers. She continued this fight when being appointed to the Board of Education, pushing for general teacher and student welfare. Her advocacy eventually led to her appointment in 1933 by Governor Henry Horner to supervisor of the new minimum wage law for women and children in Illinois. She made strides, getting new wage scales for women & minors working in laundries, and pushed for wage regulations in beauty shops. In 1942, she was made assistant to Thomas F. O’Malley, regional director of the federal wage and hour division of the U.S. Department of Labor. 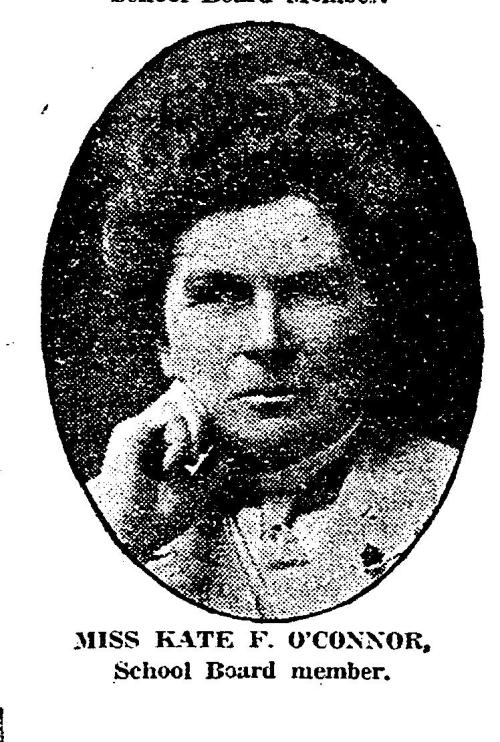 Kate was an outspoken supporter of the woman’s equal rights movement, cited many times locally in papers for her comments on the subject, and was well known for her strong opinions on equal rights for women in all ways. In an 1888 article noting Rockford women’s differing opinions on the topic, Kate states: “Great reforms will always work out in time, and woman suffrage is inevitable. There is certainly no good reason why woman should not vote if she wants to, and every argument advanced against it so far, is without foundation, and cannot be substantiated by rational proof.” (Daily Gazette, 1/26/1888) As the flag was raised on the newly completed courthouse in Rockford, Kate tied a yellow ribbon, representing equal suffrage, to the flag’s rope.

A charter member of the Illinois League of Women Voters, she spoke to women’s groups across the state, working diligently in the effort to win the vote, and, after that battle was won, continued to remind women of their duty to vote. In 1929, along with Jane Addams & Catherine Waugh McCulloch, she was honored by the National Suffrage Organization for her efforts. The next year, she had another first as a member of the first jury in Winnebago County to have women and men serving together. In 1932, she was Vice chairman of the 12th Congressional District for the Illinois Democratic Women’s Congressional Committee.

She actively campaigned for Ruth Hanna McCormick, Judge Henry Horner, and President Franklin D. Roosevelt, and was appointed by Horner to run his re-election campaign for his second term as Governor of Illinois.

Starting around 1907, Kate commented on her preference to wear suits, as seen in this photo, c. 1930. (Midway Village Museum)

This of course is only the tip of the iceberg. There’s lots more to learn about Kate! Go to our Downloadable Resources page here to learn more!