Ervin Grant Bottlemy, born on July 7, 1890, grew up on a farm in Alden, IL.  He enlisted in the Army on June 5, 1917 – two months after the U.S. declared war on Germany.  As a corporal, Ervin trained at Rockford’s Camp Grant until February 8, 1918 and went on to serve in different areas of France.  While there, he served as a motorcycle dispatch rider, truck driver, and mechanic.  He was the first soldier from his town to go overseas.

The letters Ervin wrote home to his sweetheart Fannie Nyboer provide insight into what military life was like for soldiers in Ervin’s outfit.  His buddies called him “Jess;” he says it is his ‘army name.’  He complained of eating mostly corned beef, tomatoes, and hard tack, and hoped that Fannie will learn to cook for him.  He broke his watch when wrestling with a friend in the barracks, but had it repaired.  He also wrote about what it was like being at the front, when he had to drive a truck while being shelled for 42 grueling hours. 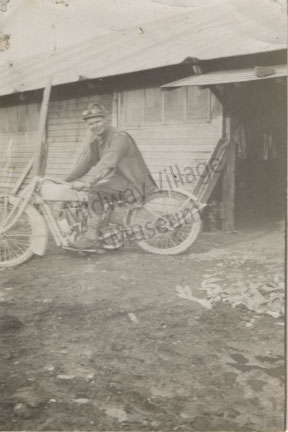 Ervin on his motorcylce in France.

When he was not repairing vehicles, he delivered dispatches to other units on his motorcycle.  He wrote that he enjoyed riding his motorcycle very much, and was pleased enough to be seeing the world on America’s dime.

“You must remember, the barracks over here are not like they were at Camp Grant, there are no floors, cloth windows, three stoves in each barracks, but still it is chilly.  Wish you could see our bunks.  They are far from fancy, but they fill the bill.  We have a straw tick, four blankets.”

Every four months on duty, a soldier received seven days off.  But, as Ervin wrote to Fannie:

“If our francs hold out, it takes about five or six hundred to have any kind of a time.” 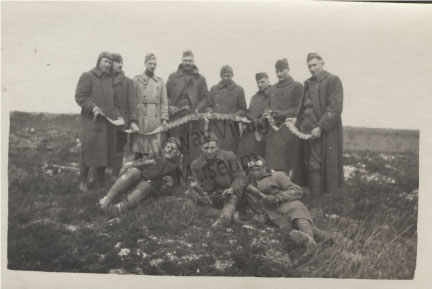 “It is an awful sight, dug outs, trenches, shell holes, clothing, shoes, bones, anyone can’t believe it till they see it, shoes with the feet in it where it had been shot off, the ground had all been torn up, it was mixed with small trees, barbed wire, and dead bodies…It was an awful sight.”

“…But I still wear the same size cap, some get the swell head. I don’t look at it that way.”

When the war came to an official end on November 11, 1918, many Americans thought they would see their loved ones come home before Christmas.  Because of this, Fannie wrote fewer letters, believing Ervin would soon be on his way home.  But Ervin knew better.  He wrote to Fannie complaining that she was not writing enough to him.

“Anyone over here should receive more than one letter a month from the girl that he had to leave behind in the USA, expecting to be his own.”

Sure enough, Ervin remained in France for another eight months.  His unit was assigned to the Motor Transportation Corps (MTC) where they repaired trucks to sell to the French.

“The Captain broke the news, he nearly cried when he told us that we were not going home, that we were attached to the MTC now.” 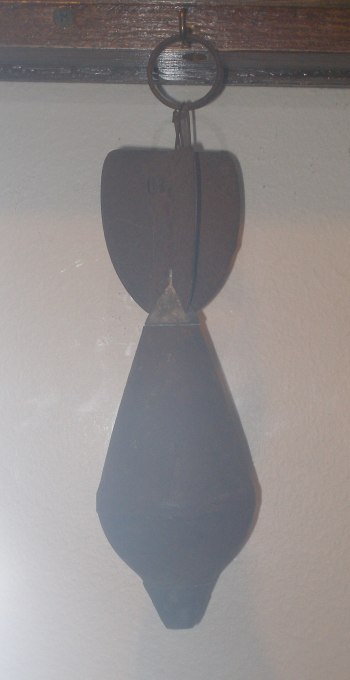 Ervin hung this aerial bomb (diffused) from the chandelier over the family dining table, terrifying Fannie.

Ervin arrived at Camp Mills in Long Island, New York in July 1919 after an eleven day trip across the Atlantic.  Shortly after, he was sent back to Camp Grant for a few days before he was discharged.  He and Fannie were married on September 8, 1920, and together they had five children. Following his discharge Ervin and his brother operated Bottlemy Bros Garage, offering general repairs on cars, farm equipment and other machinery, till 1972 in Alden, IL.

See Ervin’s uniforms and other military items on display in the main museum building!

Visitors will walk near encampments, talk to the re-enactors about life as a soldier during The Great War, and learn about the various military equipment, as well as experience cavalry and medical units, battles and skirmishes in the Village, and much more!

Visitors will enjoy:
.  Living history encampments
.  Trench displays showcasing the fighting techniques of the time
.  Indoor displays of World War I weapons and skirmishes in the village
.  Additional special presentations on the history of chemical warfare during World War I, General John Pershing, the General of the Armies of the United States
.  A new exhibit highlighting the WWI experience of Ervin Bottlemy, a native of Alden, IL, who trained at Camp Grant and went on to serve as a motorcycle courier in France
. Special school programs will be available on Friday, April 12

As part of the experience, visitors may attend a special dinner at the Command Post Restaurant, housed in the original Camp Grant firehouse.  Cost is $25 per person and includes transportation, dinner, and entrance to the Camp Grant Museum, as well as a talk about the history of Camp Grant from Yolanda Weisensel.  For more details, call Jessica MacDonald or follow this link http://www.midwayvillage.com/wordpress/wp-admin/admin.php?page=events&action=edit&event_id=71.

Share With Us!
As part of the event, community members are invited and encouraged to submit photographs of World War I soldiers (from their families).  The photos will be displayed as part of a video presentation at the event.  Submit photos to WorldWarIPhotos@live.com.  The museum will share all photos on its Facebook page.  Search Midway Village Museum on the social networking site.

3 responses to “Ervin Bottlemy: Motorcycle Courier in the Great War”