Today, movies are a popular form of entertainment.  Not only are theaters becoming bigger and better, the movies themselves are pumped up with better sound, graphics, and special effects.  It makes us wonder where technology will take us next.

But what about life before movies on the big screen?  People over 130 years ago knew where to get entertainment, and where they themselves could become celebrities – vaudeville. 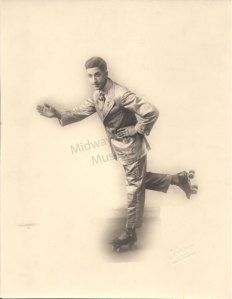 Vaudeville’s roots lie in the 1850s as variety acts strictly for male audiences.  It’s no surprise then that these acts mostly consisted of comedies, which were known for bordering on obscene.  In 1881, Tony Pastor, a performer from New York, created a variety show for families.  By inviting a larger audience, Pastor found that he could make more money.  During vaudeville’s heyday between 1880 and the 1920s, these performances were the most popular form of entertainment and were an integral part of every community.  Vaudeville was a symbol of cultural diversity because it was the first to cross racial and class boundaries. 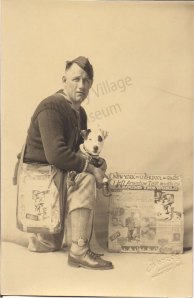 A typical show consisted of 12 or more acts lasting over a period of hours.  The acts consisted of both talent and quirkiness, including pianists, contortionists, dancers, tumblers, and animal acts, but most of the shows were based on comedy.  Many acts were made up of families who traveled around the country to perform at different venues.

Rockford’s Orpheum, Palace, and Palm Theaters were all home to many vaudeville performers.  Acts that came and performed included celebrities such as Harry Houdini, George Burns and Gracie Allen, Olsen and Johnson, and Edgar Bergen and Charlie McCarthy.

The Palace Theater was located at 113-115 North Main St., very close to the Orpheum Theater.  It opened on February 22, 1915 as part of the Junior Orpheum Circuit.  During the 1930s, it too was used as a movie house.  In 1957, four years after Rockford got its first television stations, WTVO and WREX, it was dismantled and replaced with Woolworth’s Department Store.  Some of the scenery and lighting were acquired for use at the Wagon Wheel Restaurant. 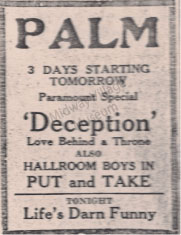 The arrival of radio and silent movies in the 1920s began to replace vaudeville.  Instead of a dozen or more acts, five acts would perform before the movies were shown, or sometimes in between shows.  By the 1930s, these theaters became strictly movie houses, and saw no more live performances.

Tonight we can turn on the television and watch late night shows with hosts David Letterman, Jay Leno, Conan O’Brien, Jimmy Fallon, Jimmy Kimmel, and Craig Ferguson.  Preceding these late night stars were, of course, Johnny Carson’s The Tonight Show of the 1960s-1990s and The Ed Sullivan Show of the 1940s.  These comedy-oriented variety shows are modern examples of old time vaudeville.

One response to “Curtain Call”